'The shortest distance between two points is a straight line.' - Archimedes

'Oh, Fortuna, blind, heedless goddess, I am [glad to be] strapped to your wheel.' What I mean is that today involved two delightful breakthroughs, and - regardless of the frequent precarity of my own situation, and the numerous calamities unfolding around the planet at any one time - there is no greater pleasure to be had than the Eureka moment. To have two in one day is, like, almost too much! 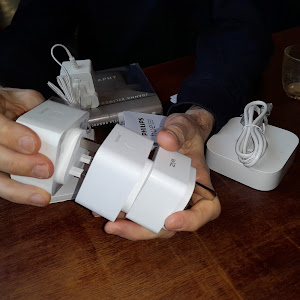 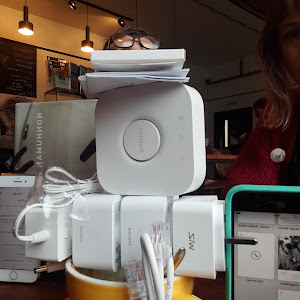 The first relates to my experimentation with the long-awaited Internet of Things (IoT). Clunky design is often a factor with new technology, and that is no less the case with the various IoT items coming available now. I won't go into boring detail, but let's just say they are one step short of what a person like me needs. I want to do something simple, namely: have a power source switch on, and remain on for 5 minutes, then switch off, and then remain off for 5 minutes, repeatedly. Once I mention this to the maker fraternity they start talking Arduinos. Apart from the fact that I am conceptually hostile to making anything, I'd even go as far as to say that 'making' is bad art: pathetic, fragile, soldered together Arduino circuits seem like the worst examples of why that is so. I have a mind which is naturally inclined to being able to build things up with logical systems, to code and use mathematical principles even, and I've taught in technology art and digital art realms, but in my view it is important to resist these crude urges. It is important to resist, for the same reasons that innocent uncritical thinking about 'representation' is important, and for the same reasons that practices of appropriation became interesting ('in a world full of objects'), and for the same reasons that the common love-affair with pretend-anti-intellectualism is a problem. Put succinctly, you can shove your Arduinos 'where the sun don't shine', and put the IoT items in the cupboard for a period.

The original (non IoT) timer plug in use currently at Gallery Dodo, allows me to switch the power off and on as described above but only for a maximum of 10 cycles, i.e. for 100 minutes. The idea had occurred to me before, but whilst having a coffee on Friday with Jon Carritt and Daniella Norton, the former, somewhat playfully, stuck three or four plugs together (see https://www.instagram.com/p/CasatKMsDBh/). His fidgeting reminded me again of the simple solution I had been pondering.

The problem with IoT plugs is that they need the internet (obviously) but I just want to do something basic, and it is still the case that bandwidth can be weak, routers fail and so on. But, but, but, wait for it! I can obtain 3 more ordinary timer plugs of the non IoT type and stick them together and set the schedule up to cover 4 x 100 minutes i.e. 6 hours and 40 minutes. As it happens that is very close to the duration Uillinn is open on a typical day. Aha!!! Later when discussing this with Tomasz Madajczak, he pointed out that the same could be done with the even older mechanical timer type plugs which generally have four slots per hour and, so, three of them could be connected and set up out of sync with each other.

The second discovery occurred whilst describing the 'Immersive Interactive Installation' work, completed in July 2021, to a friend this very afternoon. I got thinking about the, possible resistance to or at least low level of interest in, my request to have the default synthesised voice changed, by the manufacturers of the 5-storey lift in the West Cork Arts Centre building. I know this must be possible, having experienced Martin Creed's Elevator Music, his Work #409, in a few different venues. But now, suddenly I don't care. The old principle of Truth to Materials, in my interpretation, means submitting, to some extent, to what is pushing back at you. I am a proponent of this. Though the origins of Truth to Materials as a concept go back 150 years, are connected with early modernism, the Arts and Crafts movement and/or the Bauhaus I believe, I am drawn to it, almost as a philosophy for life. The approach fits with certain cybernetics ideas too, about getting along with systems one does not need to understand. That's not to argue for ignoring one's own agency in a situation, but these elevator lads (meant in the common non-gender-specific sense) have not been responding eagerly to Stephen Canty's requests on my behalf. I was on the brink of 'reaching out; to them myself but instead it is time to accept the message, a dive into the feedback loop.

Here is the plan. In the morning, I'll ask Stephen whether the Immersive Interactive Installation video, recorded on the LG (Life's Good) phone last summer, can simply be installed in the lift itself. This would mean hanging a screen (with the longer dimension vertical) in the lift, with sound on, and simply setting it running. So, as people go up and down in the actual lift, there'll be a video in the lift, of the lift going up and down, with the acoustics overlapping and going in and out of phase, depending on the level. How good! How bad! This solution is right up my street. An obvious extension would be to then film the installed work, and play the result on the screen, and so on, repeatedly, de Selby style, but I don't care to follow that line, for a few reasons which will not be gone into here. Anyway, problem solved, job done, as they say. x